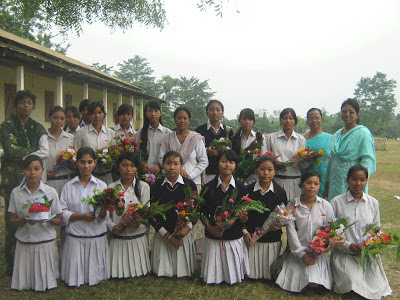 Christian English High School is a Self-supporting Mission School under the guidance of Karbi Anglong Baptist Convention. The institution is affliated to the Board of Secondary Education Assam (SEBA). By God’s grace the school has been able to carry out its activities without much difficult. Morning devotion has been conducted every alternative day in which students were assigned to read one Bible verse, GK tips and News for the day. It is worth mentioning 17 students who passed in 1st division and 2nd division securing above 50% were selected for the Anandoram award. Two students securing 1st div. have received Laptop .15 are awaited for computer set each. The school has completed 45 years  serving in the field of education, during which lots of potential men and women have been produced. It has been a great challenge for all of us as 70% of the total strength are from non Christian background and 60% from poor family. We covet your prayer support and co-operation for constant growth.

SCHOLASTIC
As per the norms and instruction of the Board of Secondary Education Assam (SEBA),four Unit tests, half-Yearly and Annual Examination were conducted to evaluate the students in the scholastic area and for promotion to the next higher class. Promotion is based on the over all performance of all the examinations.

NON-SCHOLASTIC
Students were assigned for deferent relevant activities such as embroidery for girls and bamboo works for boys, under strict vigilant and supervision of the teachers for all round development. Equal important was also given in the field of games and sports.

EVENTS
1.  Annual Sports:
The 45th  Annual sport was conducted from 19th to 21st February,2013.Rev.D.Ingti,Chairman of the School management Board was invited as the chief guest. Students participated in all the events with full spirit of sports. Medals for senior and prizes for junior  were awarded to the winners for different events.
2. World Environment Day:
World environment day was observed on 5th June 2013 to bring awareness for  students the important of healthy environment.
3.  Teachers’ Day:
Teachers’ Day was observed on 5th September,2013,with the initiative of the senior students with special items performed by the students to show respect and honour to their dear teachers.
4.  Children Day:
Children Day was observed on 14th November,2013.Teachers took the initiative to conduct various competitions for the children such as Quiz and extempore for senior and art for junior. Prizes were given for winners.

PARTICIPATION
1. 18 students with 2 teachers and support staff participated the KABC Annual Meeting  from 7 – 10 March 2013 at A’Jongpha(WRBA) Special items were presented in four services. Students and teachers who attended were richly blessed.
2. Students participated in the March past on Republic Day and Independence Day, 2013
3. Senior students participated Quiz competition on “Malaria awareness” conducted by NGO

PROJECTS
The school has two projects which have been an income generating for the school.
1. Rubber: Tapping was not done in 2013 to regain healthy of the trees
2. Fishery: Fish could not be put in 2013 as the ponds need to be cleaned after the lease period was over.


NEW CONSTRUCTION
1.Children Park : Children Park have been made. Play things for children have been installed and dedicated  on 14th May 2013 by Rev. D. Ingti, Chairman & Genl.Secretary,KABC. in the presence of Board members, staff and children.
2.Construction : Construction of Primary building partition walls have been completed and wall surrounding Latrine have also  been completed.
3.Rubber plantation : Ground Preparation for extention of Rubber plantation is on, more than 100 pits have been made ready.

VISITOR
Ms. Ashley from Florida USA visited the school for 8 days from 22nd  to 30th November 2013 for her internship on “Economic Development”.


ASSET
By God’s grace the school is able to own Brand New Bolero Car on 14th March 2013.